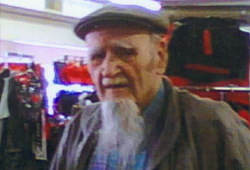 Lawrence (Bush) Holley was a bit different. He wore a fumanchu and slept on a 30-year-old free couch in his living room with a gun under his pillow. In his prime, he was a motorcycle enthusiast, maybe even a motorcycle pioneer. He wore black leather and carried a hawk-bill knife in his boot and knew how to use it. I heard one gentleman who said as a youth growing up in Greeneville that he learned how to walk on the other side of the street if he saw Bush coming. Bush Holley may not have been a guy that you dreamed about sitting next to you at church, but his life can teach us all a lesson about the dangers of reading a book by it's cover.

Bush was no doubt a man's man. He had a bit of an outlaw image, but in fact he was an early motorcycle cop in Greeneville and also served as chief of the local police auxiliary. He loved motorcycles, but he also loved the Lord. Bush was a very private man. He was an Indian motorcycle dealer from 1938-1941 and ran a Harley Davidson dealership from 1947-1958. While he stayed away from the church in his young adult and middle age years, he found his way back after his wife, Lena's, death. Bush sat on the very back row. Bush also knew the value of a dollar and never saw much benefit in wasting time or money. He hated debt.

Bush Holley back in the day

As Bush aged, he mellowed and so did his demeanor and image. He faced some health issues. He had to be hospitalized and the ladies in his Sunday school class went to visit him at home after his discharge. His house was not neat...they worried he had no food or means to care for himself so they rotated bringing food and just checking to make sure he was getting along. Bush said he did not need any help, but it meant the world to him. It meant that he mattered and that his church cared!

Bush Holley died in early 2008 at age 93. Jaws dropped when Bush Holley's will was read. He left $10,000 to the church cemetery where his parents were buried and left over a half a million dollars to Trinity United Methodist Church with no restrictions in place. The church has improved facilities, eliminated a mortgage, and even set aside funds for the future with a fund in the Foundation. Bush Holley left a legacy and you can, too!

If you or your church are interested in learning more about legacy gifts and opportunities, please contact the Holston Conference Foundation.