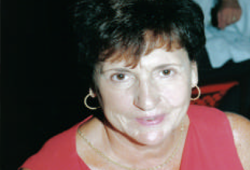 Rita Hommel was born and raised in Dayton, Tennessee. She and George were married in Dayton while George was a student at the University of Tennessee. After graduation, Rita and George moved to Kentucky and for 30-plus years lived away from Tennessee. During their 52 years of marriage, Rita was a loving and devoted wife, mother, grandmother, and homemaker. Her greatest joy came from bringing joy to others. For this reason, Christmas took on a very special place in her life. Family and friends were drawn to Rita during the Holiday season. She had a way of bringing the full meaning of Christmas to anyone she came in contact with.

In 2003, Rita and George sold their business in Kentucky. In 2004, they retired back home to Tennessee, settling in deep west Knoxville. Once settled in their new house, they searched for a new church home. During this time, Rita was suddenly diagnosed with a new cancer. George visited and was welcomed at First Farragut United Methodist Church. Rita tragically died on August 24, 2005 and Rev. Bernice Kirkland, then associate pastor at First Farragut, assisted with the memorial service. The next week George joined the church.

After her death, George and daughters, Janet Sebba and Leslie Smenner wanted to do something special in Rita's memory. George met with Rev. Richard Edwards and Clyde Tisdale from First Farragut, who in turn, asked the Foundation for assistance.

In keeping with Rita's desire to share the spirit and joy of Christmas with those people and families less fortunate, THE RITA HOMMEL CHRISTMAS MISSION ENDOWMENT was born. George funded the endowment and also provided funds to be used to "prime-the-pump" and begin supporting ministries during the 2005 Christmas season.

Each year this endowment will provide a minimum of $5,000 to be used by the church's mission team to help the less fortunate by supplying toys, food, medicine, clothing and other needs through the hands-on involvement of members of First Farragut United Methodist Church. It is the Hommel Family's hope that the church members involved in the distribution effort will be as blessed as the families receiving the support.

Steve Krupski, chair of the Missions Team at First Farragut UMC reports that over $3,000 was used during December to support various ministries, including the following: • Supplied $1,000 worth of toys and clothes to the Morgan-Scott Project. This involved a group of First Farragut UMC members going shopping and a second group delivering the toys and clothes to Scott county along with the other things that were collected by the congregation.

• Working with the Compassion Coalition, the church adopted five Katrina families here in Knoxville. After contacting them to find out what they could use a group went shopping for $1,000 worth of toys, a bicycle, table and chairs, diapers, clothes and gift certificates. Another group delivered the gifts to the families and wished them Merry Christmas.

• A single mother and children were adopted from the empty stocking fund. Someone from First Farragut UMC congregation shopped for $189 worth of gifts and delivered them to the family for Christmas.

• During the week between Christmas and New Year's Day, First Farragut UMC took their turn receiving phone orders and delivering bags of food for FISH. Only this time the bags of food going to families included a ham. Twenty (20) spiral-cut hams worth $280 were distributed. FISH never includes meat in the bags of food they deliver as emergency meals.

• On Saturday before New Year's Day, First Farragut UMC delivered mobile meals to 29 senior shut-ins. The church does this the first Saturday of every month since mobile meals does not deliver on weekends. However, this time they delivered 20 fruit baskets totaling $200 to the households along with a wish for Merry Christmas and Happy New Year with the hot meameal. It was reported that there were a number of wet eyes.