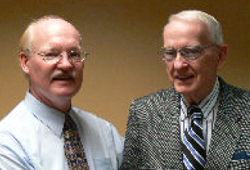 On October 14, 2008 it came as quite a surprise to Bob when, at the end of a Foundation board meeting, he was presented a framed resolution honoring his many years of service to the Foundation and the Conference. Bob Hudson passed away July 2, 2011. The following story was published in 2009 before his death.

On October 14, 2008, Bob Hudson was the special guest of Walt Seaman at the Holston Conference Foundation's fall board meeting in Alcoa. It came as quite a surprise to Bob when, at the end of the meeting, he was presented a framed resolution honoring his many years of service to the Foundation and the Conference. An announcement followed that in addition to the resolution, the Board had created THE ROBERT B. AND CAROLYN E. HUDSON SEMINARY SCHOLARSHIP ENDOWMENT with an initial grant of $25,000. This fund will annually provide a $1,000 scholarship to a seminary student from the Holston Conference who intends to return to Holston to serve as a pastor. "There is a tremendous need for this scholarship and additional resources to support seminary students in the years to come," said Richard Timberlake, Foundation board president. The cost to attend seminary has risen rapidly over the past few years and many of our young seminary graduates are struggling under a suffocating debt load. This scholarship honoring Bob and Carolyn is a great example of what we hope will be a growing source of support in the years to come.

Bob spent 30 years serving as a Holston pastor before coming to the Foundation in 1987. He served the Foundation with distinction in many capacities including Director of Development, Director of Planned Giving, Executive Director, Board Member, and Conference Relations Committee Chairperson. Bob also served as the Conference Treasurer. Bob and Carolyn's example of living the Christian faith through their gifts of time, talent, treasure, presence, and faithful service have contributed significantly to the Foundation's growth and success through the years.

Bob helped to build a firm foundation under the Foundation and greatly enhanced the previous work of Ben St. Clair and Gordon Sterchi.

The Foundation Board and its Executive Director are forever indebted to Bob and Carolyn for their years of dedicated service and faithfulness to the church. The seeds that Bob cultivated with donors and churches during his service as executive director of the Foundation are still bearing fruit. Well done you good and faithful servant!