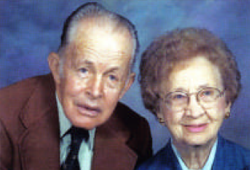 A Lasting Legacy for the Future

Allen Lindamood was well known as a hard working cattleman and farmer and was a longtime member of Enterprise United Methodist Church in Piney Flats, Tennessee. He passed away on February 11, 2005, just eleven days short of his 90th birthday. His wife, Pauline McKamey Minnick Lindamood, a native of Bluff City passed away the previous year on February 21, 2004 at age 91.

The Lindamood's began their time together late in life. Pauline was 65 and Allen was 63 when they married in 1978. She was a widow and he had never been married before. They shared 25 years together in Allen's boyhood home on the banks of the South Fork of the Holston River at Boone Reservoir.

According to Richard Minnick, Pauline's son, Allen was a quiet and gentle man. Pauline was lively and much more outspoken. They were highly devoted to the Enterprise United Methodist Church and to the Enterprise community. Their hospitality extended to their families and friends who would stop by for short visits. They loved living on their farm and managed to maintain a very simple and uncomplicated lifestyle. Allen was said to have driven more miles on his farm tractor than in his farm truck. Later in life, they both enjoyed sitting on the porch of their farmhouse watching the cattle grazing in the fields and their farm cats playing in the yard.

Allen's will left a bequest of approximately $220,000 to establish THE ALLEN B. LINDAMOOD AND PAULINE M. LINDAMOOD MEMORIAL MINISTERIAL SCHOLARSHIP FUND to annually award one or more scholarships to students, which will lead them to appointment as an ordained minister in the United Methodist Church. The Lindamood's gift is a direct investment in the future ministry of the Holston Conference and will assist the Conference in filling the great need to educate and attract future ministers. This scholarship will be administered in the Foundation through the Board of Ordained Ministry and the Director of Clergy Services. It is expected that this endowment will provide $8,000 - $10,000 annually in perpetuity. We thank God for their generosity.