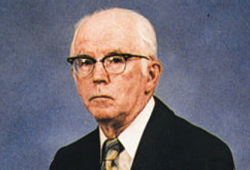 To make a good baseball team, you have to have good coaches along the way who understand the game. The Foundation office plays the role of a "coach" to many of our Holston Conference churches. Rev. Larry Lusk, Pastor at Washington Chapel UMC in Abingdon, Virginia, knows this first-hand. He first contacted the Foundation for a meeting with the church Finance Committee, then the Church Council and ultimately with the whole church. From preaching on Sunday to meeting with various people through the week, together we helped the church plan a lasting legacy that will honor Walter Minnick's life and benefit many people through his generosity. The following story is about how one person really made a difference for his church...

Walter Minnick grew up the way that most people did around the turn of the century. He lived on a farm just inside the Abingdon, Virginia city limits. His mother was a saintly lady who made sure her son was involved at the local Methodist church. He attended Sunday school and church all his life.

Walter attended Fairview Elementary School (which is no longer there) and Bethel High School, receiving his diploma in 1939. Walter was a hard worker on the farm, where there was no shortage of chores to do, like feeding the cattle or getting the ground ready for wheat, sugar cane, potatoes, corn, or tobacco. There was always a "patch of potatoes" for the church folks to use however they saw fit. He also enjoyed photography and took pictures at many church gatherings. Fellow church members, Phil and Vickie McCall, have many good memories of Walter. "I helped him on many occasions, digging potatoes and harvesting sugar cane. The church always got a share," Phil recalled.

Whenever Walter had a break in school or the chores, he loved playing baseball! His favorite words to hear were, "Batter up". He loved the sound of a ball smacking against the bat, and then off he would run to first base! Because he had a bad foot, he always needed a pinch runner to finish the bases for him. When he wasn't playing baseball, he was watching others play when his high school team traveled to Whitetop or Saltville. Following baseball was a lifelong enjoyment for Walter. He knew many of the minor league players, some who made it to the big leagues, and loved watching the Atlanta Braves on television. He also enjoyed reading, and had a large appetite for learning, especially history. One of his evening traditions was to sit with the sunshine streaming through his window, reading the newspaper. Many who knew Walter said, "You could always see him reading the paper with his glasses resting on his forehead."

"He liked having a good time and could be the life of the party," according to Mrs. Hagy, who was one of Walter's best friends from elementary school. "Walter was a good friend and was very involved with his community."

He was an assistant rural route mail carrier for 39 years. If you asked Walter about someone's background or family, he always knew the answer!

Over the years, he became the one person you could count on at the church dinners, for he loved the home-cooked meals. Judy Thomas, fellow church member, should know.

She made a lot of "to go" plates for Walter. He wouldn't let Judy pick him up in a car because just once she ran into the ditch at his house - that was enough - Walter preferred Judy's husband, Bobby Thomas, to come and get him from then on. Rev. Larry Lusk visited with Walter after Lusk was appointed to Washington Chapel United Methodist Church. According to Lusk, Walter was very quiet and full of dry wit. One time he shared that he wouldn't be preaching on Sunday, and before he could say who was going to take his place, Walter said, "That may not be such a bad thing." The corners of Walter's mouth curled up in a smile. "Don't tell anyone I said that, preacher!"

Walter learned a lot about friends, church, and baseball, but he never experienced the thrill of hitting a home run in his high school days. However, in his will Walter left one-half of his estate to his church. This $500,000+ gift will help his church and the community know more about the love of Christ.