A Legacy of Meeting "Some Needs"

EDITH LEMING SKINROOD had the looks of a movie star and the disposition of an angel. When she died on January 27, 2007 at the age of 93, she also left behind a legacy that will make a lasting difference for United Methodist students in the Holston Conference through a scholarship endowment created in the Foundation through her will.

Edith was the daughter born to Reverend William Henry Leming and Zelma Paralee Ogle Leming. According to cousin, Bobby Mize (Broadway UMC, Maryville) they spent many happy Ogle family reunions gathered at the Leming home at various locations of the Methodist parsonages. According to Bob, "Edith was one of the prettiest, sweetest, kindest, and loving ladies I have ever known.

Edith was always a studious person with a flair for art and poetry. She graduated from Hiwassee College in 1933. She taught school for a few years before taking a position as the assistant to Program Director at the Knoxville YMCA. As World War II began, she worked with the YMCA's USO and Red Cross program providing social programs and activities for service men and women on leave near their bases.

After the war, Edith worked at Oak Ridge where she met her first husband, Milton Kleintop. They married in 1954 and moved to Ohio where he became a professor at Whittenburg University. It was at Whittenburg where Edith continued her education and received her bachelor's degree.

Following Milton's death in 1972, she met Col. Floyd Pratt and they married in 1977. It was a short marriage as he died in 1979. Even though she mourned the deaths of her husbands, she continued on with her life and interests. In 1983, she met Col. Norman Skinrood and they dated long distance before marrying. According to granddaughter, Taylor Skinrood, they were soulmates. Norman and Edith moved to Azalea Trace in Florida and spent many happy years together traveling, sightseeing, and visiting with family and friends before he passed away in 1993. Despite her own aches and pains, Edith continued like the Energizer bunny through an active lifestyle with family and friends before her own passing in 2007. She was 'til the end a lady! Bob Mize officiated at a celebration of life service held at Macedonia UMC in Knoxville.

During her lifetime, Edith loved culture, art, poetry, and many of the finer things in life, but she never forgot her roots and upbringing in Tennessee. In her will she created scholarships at Whittenburg College, West Point, and one in the Holston Conference Foundation that will benefit United Methodists students at Hiwassee College, as long as it remains in operation and is affiliated with the 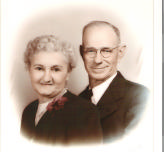 Edith's parents, William & Zelma Leming. William served as a pastor in the Holston Conference.
church. Should Hiwassee close, the scholarship would benefit other United Methodist students who reside in East Tennessee.

Although Edith never had children of her own, she is survived by numerous nieces, nephews, cousins, stepchildren, and step grandchildren who she loved and who loved her. Nieces, Carolyn Chrisman and Karen Graves, served as coexecutors of her estate and helped to follow through on her final wishes to help young people receive an education as part of her lasting legacy.
"Some Needs"
by Edith Leming Skinrood

To make me glad Requires not much; The new of morning And your touch; Spring trees against the sky Like lace; And sometimes rain Upon my face; Enough of work To earn my keep, And sleep thereafter Quiet and deep.