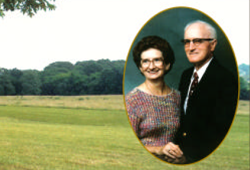 A Story of Caring and Giving

Schuler Stooksbury and Mary Margaret Norton were married on July 16, 1954 in Concord, Tennessee. Schuler had grown up in the Methodist Church and Mary Margaret had grown up in the Presbyterian Church. They were both very active in their respective churches, Concord United Methodist and Concord Presbyterian and continued their memberships in each throughout their happy marriage. Mary Margaret became the first woman Elder in her church, while Schuler was very involved in the support and financial activities at Concord UMC. They both felt strongly about tithing and providing help for the needy. Their spirit of sacrificial giving and service led them to the decision to eventually give their 16-acre farm for the purpose of establishing a permanent endowment for helping needy people.

Schuler retired from the U.S. Postal Service as a mail carrier in 1973 and Mary Margaret retired from a long secretarial career at the Oak Ridge National Laboratory in 1979. They both loved gardening and farming. They believed that everything in the world belongs to God and that they had been blessed with God's gifts. Their lives demonstrated their strong faith through their actions.

Before Mary Margaret's untimely death from a massive heart attack in 1992, they had discussed eventually giving their farm to charity. In 2005 when Schuler's health declined and he moved to assisted living facilities, he contacted his church seeking help in establishing the endowment. Concord UMC, in turn, called for assistance from The Holston Conference Foundation.

On August 22, 2005, Schuler Stooksbury funded THE MARY MARGARET AND SCHULER C. STOOKSBURY CHARITABLE TRUST, through the gift of their home and farm in Farragut, Tennessee. This fund is established by Schuler in loving memory of Mary Margaret with thanksgiving for sharing her life, love and companionship. Schuler is also grateful for the love, compassion, and friendship shared through the years with the clergy and the members of Concord United Methodist Church and desires that this fund be a catalyst that involves and encourages other people in the ministry of caring for others.

After Schuler's death, proceeds of the Trust will create a permanent endowment for Concord United Methodist Church. Earnings from THE MARY MARGARET NORTON AND SCHULER C. STOOKSBURY ENDOWMENT will be used to support Christian outreach and ministries, especially those ministries benefiting the needy, including members of their own congregation, those in the local community, retired ministers, widows, senior citizens, orphans, and those that are ill, hungry, and lost.