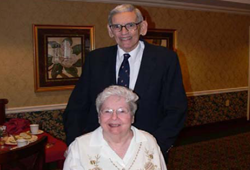 Patricia (Pat) V. Timberlake was quite a special lady. She was a devoted pastor's wife, an accomplished educator, mother, and an active and devoted Christian. When she passed away on May 10, 2010, after a multi-year battle with Multiple Sclerosis she left a void in many lives, but there can be no doubt that she is getting Heaven properly organized and ready for those who will follow. Despite all the reasons Pat could have offered to be sour, she had a delightful sense of humor and was genuinely interested and concerned for others. She was particularly touched by the work of Partners in Crisis, founded by Betty Hurlock and other clergy spouses in 1995, which serves ministers and their spouses dealing with marital problems. Pat introduced the Foundation to this need which helped lead to the creation and funding of THE PARTNERS IN CRISIS ENDOWMENT as a vital source of funding for this important ministry. She and Dick have generously supported this ministry through their time, talent, and treasure.

At the Spring 2011 Foundation Board meeting the following Resolution was passed honoring Pat's life and service:

THE HOLSTON CONFERENCE OF THE UNITED METHODIST CHURCH FOUNDATION, INC. WHEREAS, Patricia V. (Pat) Timberlake served faithfully alongside her husband, Richard H. (Dick) Timberlake, a United Methodist minister, in the work of his churches across the Holston Conference; and

WHEREAS, Pat earned degrees from three universities, including a B.S. from Florida State, the M.R.E. from Emory, and the Ed.S. from Tennessee; and

WHEREAS, in her professional career she devoted herself to early childhood education teaching in public schools and service across East Tennessee as an adjunct faculty member of Walter's State College in training Head Start teachers and other leaders of young children; and

WHEREAS, Pat was a devoted mother to a son, Richard (Tim) and daughter, Janet, and a life partner, companion and devoted wife to Dick for 57 years of marriage; and

WHEREAS, she was a committed and enthusiastic Christian since childhood and was very active in the life and ministry of Concord United Methodist Church and it's SUSANNA CIRCLE and it's SPECIAL STUDIES class; and

WHEREAS, Pat introduced the mission of PARTNERS IN CRISIS to the Holston Conference of the United Methodist Church Foundation and encouraged the Foundation's support for that ministry through the creation of an endowment in 2003, which she and Dick have continued to support through their gifts and prayers;

NOW, THEREFORE, BE IT RESOLVED this 19th day of April , 2011 by the Board of Directors of this Foundation that such Board, on behalf of the Corporation, hereby expresses its appreciation and gratitude to Pat & Dick Timberlake for their lives of service to our Church and Foundation by renaming the PARTNERS IN CRISIS ENDOWMENT, now and forever, THE PATRICIA V. TIMBERLAKE PARTNERS IN CRISIS ENDOWMENT.

BE IT FURTHER RESOLVED that an official copy of this Resolution, as signed by the Secretary and Executive Director, be given to Richard H. Timberlake as a symbol of our deep affection and appreciation.