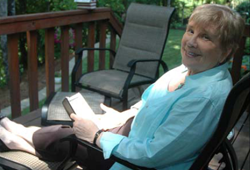 The Lord is in All of This

Rev. Linda Bird Wright passed away April 5, 2012 after battling Stage 4 lung cancer. She was recently a full-time associate pastor at First Centenary UMC in Chattanooga. Wright gave $92,000 in her husband's memory to build a Holston Conference guest house in Yei, Sudan. She had her eye on other ways to share God's love in a place where she saw so much potential. The following story was published in the Fall 2010 Foundation newsletter.

The Rev. Linda Bird Wright has been through so much in the last two years, one would expect her to be changed. But here she is, on a good day between chemotherapy treat-ments, serving chicken salad sand-wiches on her deck and talking about Sudan. She is not defeated. In fact, she's ready to hurl her suitcase on a plane to cross the ocean. "I would move over there tomorrow if I could," says the pastor. "What I saw there was not a desperate situation. What I saw was a glorious opportunity, literally dropped into our laps by God. "We have the chance to have an effect on the lives of young people - to transform an entire nation with the love of Jesus."

Linda is still Linda, and she's got a lot on her plate, despite Stage 4 lung cancer and a recent full-time appointment as associate pastor at First- Centenary United Methodist Church in Chattanooga. Wright has given $92,000 in her husband's memory to build a Holston Conference guest house in Yei, Sudan. She's also got her eye on other ways to share God's love in a place where she sees so much potential.

TRAGIC MONTHS
Eighteen months ago, Sudan was barely on Wright's radar screen. She was a Holston pastor who had served Soddy UMC and Unicoi UMC, among others. At Annual Conference in June 2009, Wright was on stage alongside Bishop James Swanson serving as a secretary, just as she has for many years past.

Many people were surprised to see her familiar face in Stuart Auditorium, because 2009 was a tragic year. After surviving a bout with Stage 3 lung cancer, Wright was on her way to Chicago for a denominational meeting when her husband was killed in a car accident. Walter Lee "Walt" Wright III, age 73, died in a single-car accident between Decatur and Dayton, Tenn., on March 18, 2009. He was driving from a doctor appointment in Chattanooga back to where his wife was appointed at Unicoi UMC. "I got the call on my cell phone, at the Knoxville airport," says Wright. She was married to the retired pilot for 44 years. They met when she was a Delta Air Lines flight attendant in the 1960s.

Funeral arrangements were made for the beloved United Methodist at his home church, Central UMC in Knoxville. An old friend, the Rev. Ray Robinson, was chosen to coofficiate. Robinson and his wife, Jane, drove to Unicoi to visit with the widow. On their return trip home from Unicoi to Maryville, Ray Robinson was fatally injured in a car accident. Walt Wright's funeral was held March 22. Ray Robinson's funeral was March 24.

The hurt continued. When Linda Wright arrived at Annual Conference, her cancer had returned and was progressive. Yet she took her seat next to her bishop as he presided over the four-day meeting. As Wright worked, she listened to the reports of Holston's ongoing mission work in Yei, Sudan. Something happened. "I just felt the Lord saying, 'Linda, you can do something about this,'" says Wright, who had traveled many countries with her husband.

Realizing that some mission needs are easier to fund because they tug at people's heartstrings -- while some needs have less emotional appeal -- Wright approached Swanson and asked, "What do you need help with?"

GOD'S CALLING
Bishop Swanson said he was "overwhelmed with joy" when Wright approached him - "for Linda, as she sought to listen to God for a way to honor Walt, and for us, as we were challenged to answer the opportunity the Lord had given us."

At the time, Holston was preparing to send the Revs. Boo and Phyllis Hankins to Sudan for a two-year assignment. Although churches were generous in supporting Sudan since Holston formed a covenant relationship with the East Africa Conference, there wasn't enough money to build a house where the Hankins could live. Holston was forced to rent an UMCOR house for their extended stay.

Swanson says he told Wright about the need for a residence, and her answer was, "I believe God wants me to build the house in Sudan." Holston leaders were euphoric. They immediately wanted to announce the gift at last year's Annual Conference. Wright, still raw with grief, wouldn't allow it. "I couldn't handle people then," she says (and even a year later, had to be coaxed to share the story). "The gift was done at God's calling. It wasn't for the public." She wasted no time, however, in donating the money through the Holston Conference Foundation and joining in construction plans. She quickly named the dwelling-to-be, "The Captain's House."

Wright smiles when she explains why the "The Captain" is more than a career title, but the name that his five grandchildren knew him by ("Cap'n"). His wife and children also used it as an affectionate nickname. The four children, now ages 31 to 41, gave their blessing for a Sudan house to be built in their father's memory. Wright's 86-year-old father, Johnny Bird, is handcrafting a wooden plaque that will bear The Captain's name on the front door.

WIDE-OPEN OPPORTUNITY
Despite her illness, the pastor made plans to travel to Sudan soon after Annual Conference. She was placed on a February mission team that was investigating the possibility of building an orphanage. Instead of being overwhelmed by the need in Sudan, Wright was buoyed. "Wow, it's such a wide-open opportunity, like a clean slate," she says. "Such a beautiful people, an open country. You can see God's hand there. I would love to live there and work." (Her doctor won't permit it.)

During her visit, the guest house site was dedicated with the singing of a Sudanese children's choir. The celebration included the burial of a time capsule containing a stone and a pair of wings. The stone pendant came from the Sea of Galilee; Walt Wright always wore it atier a Society of Biblical Studies trip with his wife. The wings were part of his pilot's uniform.

"If Walt had been at the dedication in Sudan, he would have been in the middle of the children's choir, singing and clapping, because he was like that," his wife explained. "So, the wings represent his travels around the world and his love for people. The stone represents his love for the Lord."

Today, Wright lives alone in Hixson in a house on the Chickamauga Creek. She's just returned from a trip to East Africa with Delphine Swanson and Libby Dearing (the decorating divas) to pick out and deliver furnishings for the Captain's House.

Last year, her prognosis was not good. Now, she says bluntly, "I'm living on borrowed time ... I was supposed to be dead six months ago." She endures chemotherapy each month with little complaint. "I have two options," she explains. "I can do the chemo, or I can die in six months. I love my grandchildren and children, and I enjoy being with my friends. I don't see it as particularly heroic that I chose to live."

Missing Walt, she admits, is sometimes harder. "He was the one who was there for me when I had cancer the first time," she says. "Grieving is cyclical. It's the little things that you miss most. Like Sunday after church, that was our life together. Now, coming back to an empty house ..."

Holston leaders say they are awed by Wright's witness - and excited about the Captain's House, as well as other Sudan projects Wright wants to jump-start.

"It is my hope that future teams will be able to stay at the Captain's House and save us money on lodging for those teams," Swanson said. "It will provide a central meeting place for the pastors of Sudan and a place where learning can take place. The house will also be a significant signal to the people of southern Sudan that we are in this for the long haul."

"I am so touched by her generosity and all the hurt and loss," says Roger Redding, executive director of the Holston Conference Foundation. "Most of us just take for granted so much about life. She has inspired so many, and I hope her journey and example will encourage others." That would be alright with her, says Wright, as long as people remember.

This story originally appeared in THE CALL and is reprinted and updated by permission. Special Thanks to Annette Spence and to Linda Bird Wright for allowing us to share this story.