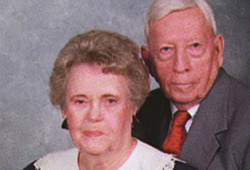 Bobby Lee Collier was an art teacher whose creativity bloomed not only among the schoolchildren, but in her flower gardens and home cooking. Neighbors and friends admired Bobby's roses, her banana pudding, and the many ways she shared her gifts through her church and community.

Bobby was a devoted wife, whose husband, Jim, was a builder. She helped build the business by decorating Jim's newly constructed homes until a tragic fall left him painfully disabled in the 1980s. Bobby lovingly cared for Jim for many years, selling their home and moving into a condo and planting flowers on their reduced lot.

Bobby was a frugal woman, who encouraged others to spend carefully and give generously. She once gave a neighbor's child a $5 bill along with advice for safekeeping. "Put this in your shoe," she said. The child, now an adult, never forgot the gift or the moment.

On March 1, 2010, Bobby died. She was 94 years old. She had no children of her own, yet she left a sixfigure gift through life insurance that will benefit many at St. Paul United Methodist Church for many years to come. The Holston Conference Foundation played an integral part in helping St. Paul maximize the value of the policy.

At Bobby's memorial service, Rev. Cliff Amos placed a booster seat on her casket. "Bobby didn't have any children in this life," Cliff said during his emotional eulogy, "but she's going to have a lot of spiritual children because of her gift."

A portion of Bobby's gift has been invested through Holston Conference Foundation and will support many ministries through her beloved Knoxville church, located in the Fountain City area. Before she passed away, Bobby was intentional in deciding how her careful savings could be used to provide programs and other extensions of Jesus' love for the people who would come after. She also designated a part of this gift to place stainedglass windows in the sanctuary of the church in their memory.

She grew up at Andersonville United Methodist Church, but for 29 years she and Jim were members at St. Paul UMC. At Bobby's memorial service, Jane Allen remembered how her friend was "like a white tornado" in her service and commitment to the United Methodist Women.

"Not only was she so talented and capable, she was so willing," Jane said. "As an artist, she was gifted in decorating, but she could also outwork all of us when we had cleaning days. Can you imagine what a positive role model, mentor, and blessing she was to all the young people whose lives she touched teaching art at Gibbs High School"

Alice Greene lived across the street from Bobby and Jim and benefited from the couple's kind acts. They watched over Alice's children, landscaped her yard, and brought over home-cooked food. Just like good grandparents do! "Everything they did was from heart," Alice says. "They pinched pennies and never bragged about anything they had. They treated me like a daughter and Jim even packed my car for the hospital when I was pregnant with the second child."

Before Bobby died, she included in her handwritten wishes that she wanted to have fellow church member, Cliff Amos, participate in her funeral along with St. Paul's pastor, Rev. Don Ferguson.

"It was a great honor to me," Cliff said. "Nobody would have thought that Bobby could have left that kind of money, but her heart was where her treasure was. It wasn't about the money, it was about the ministry. We can all do our part, and Bobby has shown us the way." The Collier's had this gift planned for many years.