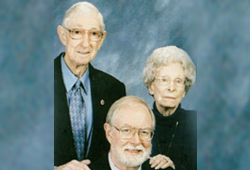 Mary "Agnes" Cureton Franks passed away on February 11, 2009 at age 94, but the legacy she and her husband of 63 years, James S. Franks, Sr., left behind is only the beginning. Back in 1981, the Franks evaluated their lives, loves and blessings and set into motion a plan to demonstrate their faith and make a difference into the future. The Franks met with Ben St. Clair, Executive Director of the Holston Conference Foundation at the suggestion of Tom Lynch to explore ways they might leave a legacy as part of their overall estate plan. Fifteen years later the Franks created a Charitable Remainder Trust through their local bank that named the Holston Conference Foundation as the ultimate beneficiary to manage the proceeds of the trust as an endowment with annual earnings to support First United Methodist Church in Newport, Tennessee; Asbury Retirement Centers; Emory & Henry College, Hiwassee College, Tennessee Wesleyan College; and the ministry of the Foundation as suggested beneficiaries.

James was very active in his local church as well as in the ministries of the Holston Conference. Retired pastor, Tom Lynch, described him as simply "a dependable man who was generous and was willing to work for the greater good." Former pastor, Chuck Starks, added, "James was a prince of a fellow. He served every leadership position in the local church and was a visionary leader of the Newport Utility Systems. He gave of his time, talent, and gifts to his church and community, and also served in many capacities at the Conference level." He was awarded for his service to Christian higher education and campus ministry with an honorary degree (Human Letters) from Tennessee Wesleyan in 1971.

The Franks are survived by several nieces, nephews, and cousins, as well as their son, James (Jim) S. Franks, Jr., a senior research scientist, fisheries biologist, and conservationist, who lives in Ocean Springs, Mississippi. Jim added, "Mom and Dad were so proud that they could provide financial assistance to support so many things they cared about in the Conference. They were wonderful folks...and I miss them greatly." Their lives of service to their church, community, and family, as well as their well planned and executed philanthropic support of the church and its ministries set a marvelous example for us all. Well done you good and faithful servants!